The Pug (Chinese: 哈巴狗 Hǎbagǒu) is a dog breed available in Nintendogs and Nintendogs + Cats.

The Pug first originated in China around the time of the Shang Dynasty, around 400 BC, and was later popularized in the Netherlands. The wrinkles on its face that give it a cute appearance to some, but an ugly appearance to others is caused by its "pushed in" snout. Perhaps one of their best features is their adaptability: Pugs can learn to love any lifestyle.

Black Pug in the DS version 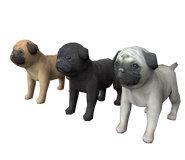 The preview icon for the Pug shown in the Kennel.

In Nintendogs + Cats, Pugs come in Silver, Black, and Apricot. If the player chooses "Surprise me!" they may find a grey-and-white pug or a pure white pug. Oddly enough, when the player chooses "Black", some of the pugs may be an extremely dark brown.

All three Pugs in the DS version

A white Pug in the 3DS version

Pugs at the kennel

The preview icon shown for the Pug in the Kennel.