View source
watch 01:36
We're Getting Mutants in the MCU - The Loop
Do you like this video?
Play Sound

While this game has much of the same style as its predecessor, this game now includes cats that can be adopted and kept as pets, along with a slew of new features.

Much like how Shigeru Miyamoto's idea for Nintendogs was based off his own experience of getting a dog, the idea for the follow-up was based around his adoption of a cat. As Miyamoto watched the cat and dog get along, it became one of the main ideas for the game.

Nintendogs + Cats was first announced at E3 2010, along with the official announcement of the Nintendo 3DS handheld system. At that event, there was a playable demo where a Beagle dog could be dressed up in accessories and played with.

More details for the game emerged at the end of September 2010, during Nintendo's press conference event in Japan. At that time, some new games were announced along with the Japanese release date for the handheld. New screenshots were also released during this time.

Nintendogs + Cats introduces a lot of new features to the franchise, including the ability to purchase cats at the Kennel.

It includes facial PIE recognition technology, such as a dog being able to recognize its owner.

The graphics in Nintendogs + Cats are a vast improvement from the game's predecessor; dogs and cats look more life-like, since they're furry and have expressive eyes. The animals are also programmed with realistic gaits and fluid animations to make their models lifelike. Even simple items like food or toys are rendered in greater detail.

It also makes different stylistic choices than its prequel; environments in Nintendogs + Cats no longer have white borders (giving them a fuller appearance), and thanks to the inclusion of Mii characters, owners can now coexist in the environment with their pets.

There are new breeds in this installment:

One of the most notable additions to Nintendogs + Cats is the ability to adopt cats, which come in three different types. Unlike dogs, cats cannot be taken out or taught tricks, but they can get along with other pets and played around with via toys. Occasionally, cats will bring back a present while the game is still running, which can contain rare items.

The built-in StreetPass application on the system lets the player share game data, along with Miis.

With SpotPass, the Nintendo 3DS will connect to a nearby internet source to check for updates and Downloadable Content released by Nintendo. DLC usually comes in the form of new neighbors who will bring a pet with a gift.

The video game allows the player to take pictures to go in the Nintendo 3DS Photo application and can be stored in an SD Card. While playing the game, the camera icon on the Touch Screen can be either tapped or the L or R buttons to take a photo of whatever is being displayed on the top screen. These photos will be stored on the SD card, which allows for players to transfer the photos onto their computer or via the Nintendo 3DS Image Share.

The player can choose to walk their dog in Pedometer mode, which allows them to close their 3DS, place it in their pocket, and start walking. As they walk or run, the 3DS's internal pedometer keeps track of the number of steps they take. Afterwards, the player can open their 3DS, and their dog will bring them a gift. The more steps that are taken, the more rare and valuable the gift that they find, and the happier their dog will be.

Owner Points are similar to Trainer Points from the original Nintendogs, with the key difference being that each pet can earn a maximum number of Owner Points daily.

There is a total of 27 dog breeds in Nintendogs + Cats (excluding the RoboPup), each version starting with 9 breeds. As with Nintendogs, there are breeds exclusive to certain versions of the video game-- though all breeds can be obtained in any version by earning Owner Points, playing a certain number of days, or by meeting a new dog breed via StreetPass.

The overall number of shops and items available in-game were increased for Nintendogs + Cats.

The Pet Supply store, also known as the BARC, sells items like food and toys for pets. Like its predecessor in Nintendogs, items get unlocked as the player earns more Owner Points, and separate pet supply shops selling different items can be found on Walks.

The Secondhand Shop makes a return, this time as a Recycle Shop (or known as Mr. Recycle) which allows the player to exchange materials found on walks for exclusive items.

Like the Pet Supply store, more items are available to exchange as the player progresses further into the video game.

The Kennel makes a reappearance, and now includes new dog breeds, coat colors, and (most notably) Cats. Pets can now be picked by coat color or pattern and interacted with up close, allowing the player to get a better impression of what kind of pet they desire.

Certain coat colors-- like a spotless Dalmatian or a white Miniature Dachshund-- can be found by tapping "Surprise Me!" on the Touch Screen.

The Accessory Store, also known as Coletta, is a brand new addition in Nintendogs + Cats. As the name suggests, it sells various accessories for pets like collars, hats, glasses, and additional accessories such as bows or masks.

The Interior Decorator, or known as Modo Home returns again, and allows the player to buy some house renovations that will change the overall atmosphere of the setting. Depending on the version, the prices for the rooms vary depending on which one the player starts out with.

A new addition to the shop is the ability to buy furniture, that could be placed in four corners of the room. That gives the ability for the pets to interact with them, like dogs sleeping on a dog bed or cats playing on a scratch tower.

The Pet Hotel makes a comeback from Nintendogs, now known by the brand name Altesse. It allows the player to drop off their pets for care, and simultaneously swap out their pet. However, the player can now own a maximum six pets, as opposed to the original eight.

Café Petrov is a brand new place that can only be visited during Walks. It serves as a place to buy dog treats, and allows the dogs to play around the area. While the treats they have to offer somewhat vary (like Tea instead Juice, or coffee for one of the options), they all offer the same effect for the pet.

A Longhair Pointed Cat going by the name of Precious resides in the café, and usually wears a different accessory every time the place is visited. He can be interacted with from the perspective of the owner or the dog, and mostly serves as a decoration.

There are three types of contests for the player and their dog to enter: Disc Competition, Obedience Trial, and Lure Coursing (which replaces the Agility Trial from the original Nintendogs).

The game was originally released on the 3DS Nintendo eShop for $14.99 USD. Hard copies were distributed to gaming retail stores such as GameStop-- which sold French Bulldog & New Friends at $19.99 and both Toy Poodle & New Friends and Golden Retriever & New Friends at the price of $24.99 [1]-- and Best Buy.

A bundle with the Coral Pink Nintendo 3DS was released on November 18, 2011, featuring a screen cleaner and a copy of French Bulldog & New Friends, Golden Retriever & New Friends, or Toy Poodle & New Friends.

In late 2015, Nintendo decided to launch a different marketing strategy for Nintendogs + Cats. In regional markets (Europe, Japan, and US) it was temporarily removed from the 3DS Nintendo eShop and then re-released as part of the Nintendo Selects product line.

Nintendogs + Cats received mostly-positive reviews from various video game critics. While it was heavily praised for the improved graphics, it was criticized for the lack of things to do with cats and not having enough variety in the gameplay.

Japanese gaming website Famitsu gave the gave a 38 out of 40, giving it a slightly lower score than it's predecessor (which was 40). 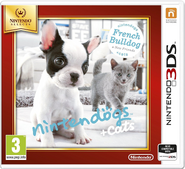 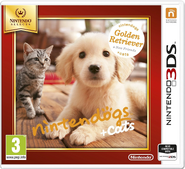 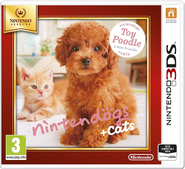 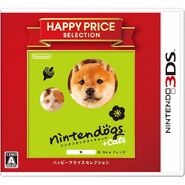 A Beagle relaxing in a Country Home.

Meeting a neighbor on a walk.

A white German Shepherd practicing Lure Coursing, a new sport in the game.

A couple of Boxer dogs at the Kennel. 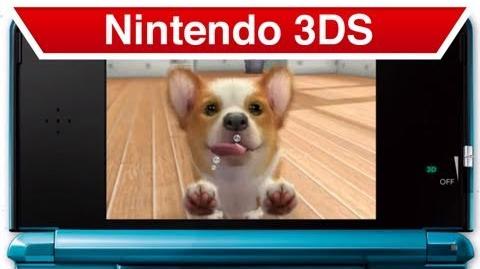 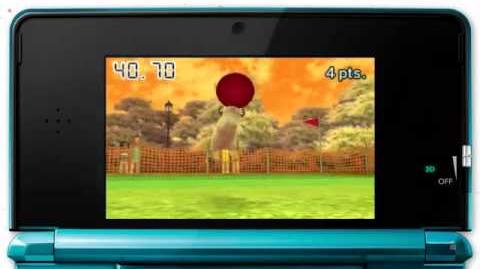