Nintendogs (Japanese: ニンテンドッグス, stylized as nintendogs) is a pet-simulation game developed by Nintendo EAD1 for the Nintendo DS. It was released in three versions; Chihuahua & Friends, Labrador & Friends and Dachshund & Friends.

A follow-up, titled Nintendogs + Cats was released on March 25, 2011 as one of the Nintendo 3DS's launch titles and like the original game, it was released in three versions.

Nintendogs originally started out as a tech demo for the Nintendo GameCube. A similar game Shigeru Miyamoto was developing, Cabbage for the 64DD (cancelled), greatly influenced his ideas for Nintendogs.

The player starts out by purchasing their first dog from the Kennel. After it is bought, the puppy needs to be calmed down and taught its name. It should be given food and water to quench its thirst and satiate its hunger.

Trainers can do many things with their dogs-- for example, they can teach them to perform tricks involving the use of the Nintendo DS's Microphone, and train them to participate in competitions. The more the player interacts with their puppy, the stronger their relationship will become.

The player can make money by selling items they find on Walks, or winning cash prizes in contests. If they have a certain amount of money, they can buy another dog to take care of or buy a new house at the Interior Decorator.

Like most simulation video games, Nintendogs doesn't have an ending sequence or a story mode.

The game starts out at the Kennel, where the player must adopt a dog of their own. Depending on the version, the breeds available will be different, resulting in different long or short-haired coats and traits. Dogs in the Kennel may also have different personalities, which can affect performance while teaching the dog tricks or participating in contests. Once a dog is adopted, another one cannot be bought until later in the game.

The player can interact with the dogs available at the Kennels by tapping "Look" on the Touch Screen. There, they can play with three different dogs (A Chihuahua, Labrador Retriever* and a Miniature Dachshund). As the dogs are owned by the Kennel, they cannot be bought.

Once the player has adopted their first dog, it will need time to get used to the surroundings around the room. After some time has passed, the player will need to think of a name for the dog, by saying it via the Nintendo DS's microphone. Once the dog recognizes the name that the player has given, they will need to call the dog via its name without using the whistle in order to advance.

Just like in real life, dogs need basic care. Every now and then, they will need to eat some Dry Food and drink a Water Bottle to quench their thirst. Dogs also tend to get dirty at times, either from neglect (forgetting to care for the dog for too long) or eating Trash.

Depending on the dog's coat length, the player will need to wash the dog with the right shampoo for grooming to be fully effective. Using brushes is also recommended, since a brush can help make the dog's coat clean without having to spend Money on shampoo, and is more likely to reward the player with Trainer Points.

Unlike real life or other pet-simulation games, Nintendogs cannot die or have puppies. If they're neglected for too long, however, their friendship with the owner could decrease.

After the player has taught their dog to sit, they can visit some shops to cater to their dog's needs by tapping on "Go Out" and "Shopping" on the Touch Screen. There are five different shops to visit: the Pet Supply store, Secondhand Shop, Interior Decorator, Kennel, and Dog Hotel.

Walks are a way for the player to take their dog to special locations. While on a walk, their dog find a present or encounter a neighbor

Using Bark Mode, players can communicate with someone else who owns a copy of Nintendogs. It allows the player to send a gift, and gives them the option to play a five-second message they have recorded on the White Record. This process can be done many times, and is a way to get version-exclusive items.

The player can interact with the other dog in Bark Mode for as long as they like, in a location that isn't seen anywhere else in the game. Unlike other Nintendo DS titles with wireless communication, this one doesn't keep track of the timing between the happenings of the two owners. Once the information from the other system's save file has been downloaded, the player's copy of the game stops communicating, and they get to play with both dogs (theirs and their Bark Mode partner's) alone.

Stored "friends" are kept in Contacts, which is found in the "Info" section at the "Go Out" menu. The player can view the other dog's stats, the Trainer Points, date of birth, and competition results.

Depending on the version, the breeds the player starts out with will be different. The rest of the Breeds can be unlocked either by acquiring Trainer Points, completing special requirements, or communicating with another dog of the desired breed via Bark Mode.

*Exclusive to the American, European, Korean and Chinese version.

On October 24, 2005, a Nintendo DS bundle was released in North America containing a special edition of the video game, known as Nintendogs: Best Friends. This bundle comes in three colors-- Pearl Pink, Electric Blue, and Teal-- and includes a special skin for the handheld and a cleaner.

While the game itself is mostly unchanged, the starter breeds are different (Labrador Retriever, Golden Retriever, German Shepherd, Beagle, Yorkshire Terrier and Miniature Dachshund) and a unique title screen is included. Also, the version-exclusive items that can be found are the same as Dachshund & Friends.

The bundle was released again in North America on November 23, 2007, this time with a Nintendo DS Lite coming in Metallic Pink or Cobalt Blue color. While the DS Lite itself has a paw print marked on it, the cleaner strap wasn't included in the bundle.

Dalmatian & Friends was first released in Europe on June 16, 2006, released on October 16, 2006 in North America, and November 2, 2006 in Australia. Unlike Best Friends, the game was released as a standalone.

The game includes the elusive Dalmatian breed that is available from the beginning of the game along with the rare Fireman's Hat. Like Best Friends, the game is unchanged and items that can be found in this version are taken from an existing one-- Chihuahua & Friends.

Nintendogs received positive critical acclaim from various video game critics. Most of the praise comes from the usage of the Nintendo DS Microphone, which allowed the person to communicate with the pet in a technological fashion.

Japanese gaming website Famitsu gave the game a full 40 score. It is very rare for a game to get a full rating on Famitsu, and only a handful of video games from the past few years have been known to get it.

Gaming website IGN gave the video game an 8.8 rating, citing the "stylized look", which made the pets look "incredibly lifelike", though the review criticized the lack of proper things to do once the main objective was completed.

This game received four nominations for the Designer of the Year, Most Addictive Game, Best Handheld Game and the Best Breakthrough Technology at the 2005 Spike Video Game Awards.

A special event known as "Nintendogs Tricks and Treats Weekend" was held across over 3,600 GameStop stores all over the United States on the weekend of October 28, 2005 until October 30, 2005. Nintendo of America donated $50,000 towards the ASPCA for the event, which went towards real-life pets with various issues.[1]

During the event, players could use Bark Mode when they entered a GameStop store and get themselves a Pair of Star Sunglasses from Haylie Duff's pet-- a Cavalier King Charles Spaniel named Bentley-- including a special White Record message from Haylie herself.

The event was made possible by special cartridges that Nintendo distributed to different GameStop locations, which had Haylie Duff's save information and the promo gift hard-programmed into them. The first person to connect to the special cartridge in Bark Mode would receive Haylie Duff's gift, and then their information would replace her information on the special cartridge. The process would be repeated for whoever interacted with the first player's dog, who would pass the promo item on to the second person and have their save data overwritten on the cartridge. Since this worked like a relay, the mode was called "relay mode".

After some point, the cartridge was set to change to broadcast mode, which would reward all of the participants with the special promo gift. [2]

Because these Nintendo locations owned the promo cartridges, players could still get the special reward in a select few GameStop stores--even after the event-- until sometime in 2007. 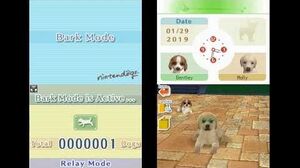 Relay Version (Uncut)
What the Relay cartridge of Nintendogs looked like

Add a photo to this gallery

Retrieved from "https://nintendogs.fandom.com/wiki/Nintendogs?oldid=41156"
Community content is available under CC-BY-SA unless otherwise noted.