The Miniature Dachshund (Japanese: ミニチュア・ダックスフンド, Minichua Dakkusufundo) is a toy dog breed in Nintendogs and Nintendogs + Cats. It is the mascot of Dachshund & Friends.

Dachshunds are small dogs, originally bred with their characteristic elongated bodies to hunt problematic tunneling animals such as badgers and foxes.

Dachshunds come in standard and miniature size and can have three coat variations: short-hair, long-hair, and wirehair. They also come in more colors than are available in-game, such as gray, brown, pure black, chocolate-and-tan, and merle. They may not actually come in pure white in the real world, but they do come in piebald (white with black) and skewbald (white with other colours), which is nonstandard according to the American Kennel Club.

In Nintendogs, Dachshunds come in three coat colors: Black & Tan, Red, and Yellow. They are classified as long-haired. 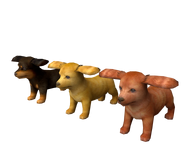 The preview icon for the Dachshund shown in the Kennel.

The Miniature Dachshund has bigger eyes and is classified as a short-hair dog. Its original color options are all available, but yellow Dachshunds are only available through the "Surprise Me!" option.

A red Dachshund in a News Boy Cap. 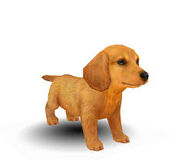 A 3-D model of a dachshund found in the game's files.

A Black and Tan Dachsund does a trick in its house.

The preview icon for the Dachshund shown in in the Kennel.