The Maltese (Japanese: マルチーズ, Maruchīzu) is a breed of dog introduced in Nintendogs + Cats. It comes from the Central Mediterranean area, around Malta and the Italian island of Sicily. The oldest record of this breed was found in Greece.

The Maltese (Latin: Canis Melitaeus) is usually a show dog, given that it has long, silky fur. Like other small breeds, such as the Bichon, Malteses are prone to reverse sneezing (also known as the mechanosensitive aspiration reflex).

The Maltese can only come in one color option: White. However, the breed can have either brown, gray, or black patches on its face and body.

There is no coloration exclusive to the Surprise Me! option for the Maltese. 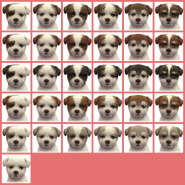 The "Maltese" displayed in-game in Nintendogs

A Maltese staring at the screen.

A Maltese with a Star Collar, A Hibiscus Flower, and Sunglasses. 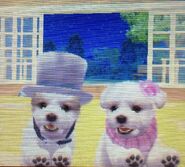 The preview icon for the Maltese shown in the Kennel.