View source
watch 01:40
The Sandman Will Keep You Awake - The Loop
Do you like this video?
Play Sound

The Longhair Pointed Cat (Japanese: ロングヘア Ronguhea) is a type of cat which only appears in Nintendogs + Cats.

The Longhair style kitten is meant to resemble Domestic Longhairs along with possible purebreds such as Persians, Himalayans, and Ragdolls.

Longhair Cats have very long, fluffy fur and a flat face. The type comes in two patterns: Pointed and Smoke. The Longhair also has a "Surprise Me!" option.

The Longhair Pointed resembles a Himalayan. Unlike Pointed Orientals, a Pointed Longhair can have "socks" or white paws. This breed's point colors include lemon, ginger, brown, gray, and black. The color point on the cat's face can come in somewhat different shapes, including a sort of star shape.

The Longhair Smoke resembles a Persian and can be solid, bicolor, or solid with a white mask. The masks that this cat can have vary in size and shape, and the bicolor cats can vary in pattern. The colors of the Smoke Longhair include black, brown, silver, blue, ginger, and cream.

The "Surprise Me!" option brings up random Longhair kittens, sometimes with an odd color tint to their fur or a star-faced colorpoint pattern. White kittens are possible but are very rare.

Star pattern on the Longhair's Face. All colors are available here though the 'background' fur appears to always be white.

A Long-Haired cat that is owned by someone, due to the accessories on it.

The preview icon for the Longhair Cat shown in the Kennel. 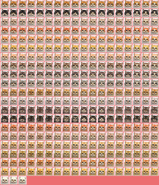