Sir Dudley Majorabanks (also known as Lord Tweedmouth) is credited for the creation of the Golden Retriever breed, near Loch Ness in the 1860s. Though originally they were bred as the "ultimate hunting dog", the Golden Retriever tends to be portrayed as the perfect family dog. As the name suggests, they love to fetch-- they were originally duck hunting companions, raised to retrieve birds such as ducks and quail after being shot. But Golden Retrievers are also loyal, patient, great with strangers, eager to please, and incredibly intelligent. They can learn many commands and are one of the easiest breeds to train.

Famous goldens in real life include Air Bud from the Air Bud series by Disney and its related Air Buddies movies, which include retriever puppies B-Dawg, Rosebud, Bud-dha, Mudbud, and Budderball.

In Nintendogs, the Golden Retriever only has three colors, similar to almost every other breed. These colors are golden, golden red, and golden yellow.

The bottom screen when viewing Golden Retrievers in the Kennel. This screenshot shows two red Goldens and a true golden. (DS) 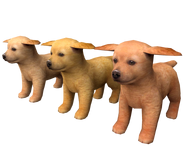 The icon shown for the Golden Retriever in the Kennel.

The Golden Retriever has one color option-- Golden-- though it comes in various shades.

If the player chooses "Surprise Me!", they may find:

Left to right: A true golden and two golden reds playing in the kennel. (DS)

An orange Golden Retriever at the Dog Hotel. (DS)

A golden found in someone's journal.

A golden licking the screen.

A golden in a bell collar.

A golden in a Rainbow Ring.

The preview icon for the Golden Retriever shown in the Kennel.