The Chihuahua (Japanese: チワワ, Chiwawa) is a toy dog breed in Nintendogs and Nintendogs + Cats. Chihuahuas are the smallest dogs in the world, weighing about 6 pounds or under. The breed is the mascot of Chihuahua & Friends.

The chihuahua's name originated from the settlement of Chihuahua, Mexico, where it was first bred. Being the world's smallest dog, it is hard to imagine this breed originating from the wolf, which is why scientists theorize that it actually originated from the small, desert-dwelling Fennec Fox.

The Chihuahua is widely regarded as cute, with the features of its head being infant-like, right down to a soft spot in the front of its skull. Chihuahuas are also sometimes portrayed in popular culture as spoiled.

In the original games, the Chihuahua has four different coats: three long-haired coats (Cream, Red & White, and Tricolor), and one short-haired coat (Tan).

It can be difficult to differentiate the Cream Chihuahua from the Tan, but Tan Chihuahuas lack fur on the inner ear and tail, while all long-haired coats have feathery tails. 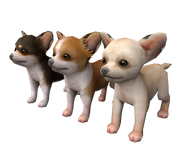 The preview icon for the Chihuahua shown in the Kennel.

In Nintendogs + Cats, the Chihuahua comes in Cream, Red & White, and Tricolor, and it comes in shorthair and longhair.

If the player chooses the "Surprise Me!" option, they may find:

A brown and black snouted "surprise me" chihuahua

Some of the neighbors have a Chihuahua. They are listed as follows. 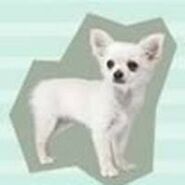 Artwork of a Chihuahua on the back of a box. 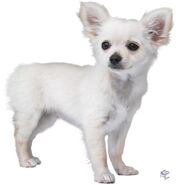 A JPEG version of the Chihuahua found on the back of a box.

A short haired Chihuahua in the DS version

A tricolor Chihuahua puppy in the DS version 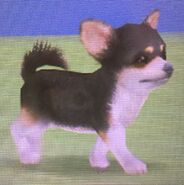 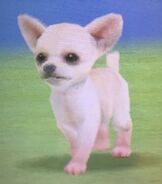 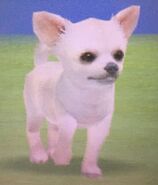 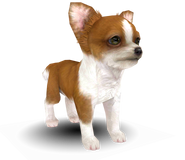 A 3-D model of a red & white Chihuahua found in the game's files.

The preview icon for the Chihuahua shown in the Kennel.