The Bull Terrier (Japanese: ブル・テリア Buruteria) is a breed of dog introduced in Nintendogs + Cats.

The Bull Terrier's original purpose was to fight, but it excelled at many other things, so it was "recreated," resulting in a sleeker dog.

The Bull Terrier's head is egg-shaped due to the fact that the top of its snout is arched - called a "Roman nose" or "Roman muzzle." Another distinguishing feature of the Bull Terrier is its triangular eyes - a feature that no other registered breed has.

Though seen as intimidating by some, the Bull Terrier is very playful, extremely intelligent, and highly recommended by experienced owners. Its friendly demeanor and unique appearance have earned it widespread recognition as the iconic canine mascot of the Target corporation, Bullseye.

Side-view of a brindle Bull Terrier.

A Bull Terrier (Middle) that is a little bit shorter than the two on the side.

A cute white Bull Terrier with a black patch around one eye. 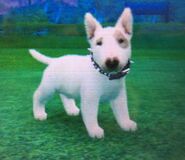 A Bull Terrier in a black Spiked Collar

The preview icon for the Bull Terrier shown in the Kennel.
Community content is available under CC-BY-SA unless otherwise noted.
Advertisement