View source
watch 01:40
The Sandman Will Keep You Awake - The Loop
Do you like this video?
Play Sound

The Boxer (German: Deutscher Boxer) is a breed of dog in Nintendogs and its 3DS sequel, Nintendogs + Cats.

The Boxer is very high in stamina and was bred down from the Bullenbeisser and English Bulldog.

Playful, outgoing, exuberant, inquisitive, and devoted, it is the perfect companion for an active family. Boxers are very smart, making them one of the fastest dogs to train; while they can be very stubborn, they are sensitive and responsive to commands.

A Boxer may be aggressive towards strange dogs, but is generally good with other household dogs and pets. They are very loving towards children and alphas, although can play rough at times.

Boxers have a high cancer rate and also suffer from heart problems.

There are three color options available for Boxers in the original Nintendogs: Brindle, Dark Brindle, and Fawn. 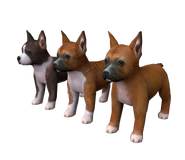 The preview icon for the Boxer shown in the Kennel.

The Boxer is given a drastic redesign in +Cats. Unlike the Boxers in the original games, their ears are not cropped and their tails are not docked.

The Boxer comes in Fawn and Brindle color options. Choosing "Brindle" can sometimes find a pinkish Boxer, a light grey one, or a very dark brown one.

The Boxers available at the kennel. Dalmatian and Friends.

Boxers playing at the kennel. Dalmatian and Friends.

A Boxer with a present (DS) 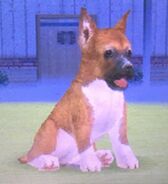 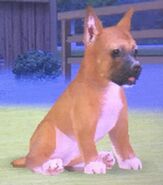 A boxer being scared of a Rubber Bone (DS)

Rover the Boxer at Café Petrov licking the screen

The preview icon for the Boxer shown in the Kennel.
Community content is available under CC-BY-SA unless otherwise noted.
Advertisement