Modern Beagles are actually a type of hound that originated around 1830. They were used by the English in the hunting of rabbits, particularly for sport. In terms of keen smell, their noses are second only to the Bloodhound. Beagles are very obedient, but they are also incredibly playful; as family pets, they have lots of energy.

Beagles are a large part of popular culture; Snoopy from the Peanuts comic strip, Grape Ape's companion Beegle Beagle, and the superhero Underdog are such examples.

The Beagle is the dog breed most often used for animal testing due to its calm and gentle temperament.

Beagles in Nintendogs come in three color options: Tricolor (with and without a white blaze) or Lemon & White.

The Beagles available at the kennel. Dalmatian and Friends.

Beagles playing at the kennel. Dalmatian and Friends.

Tricolor Beagle with a white blaze

The preview icon for the Beagle shown in the Kennel.

In Nintendogs + Cats, the Beagle comes in Tricolor and Lemon & White. Beagles are one of the easiest dogs to train in this installment of Nintendogs.

If the player selects "Surprise Me!" they may find:

The beagle was used as a mascot to advertise the Nintendogs Best Friends game.

A beagle in a Japanese version of the game.

A beagle chases a Pembroke Welsh Corgi in Bark Mode.

A lemon and white Beagle in the DS version 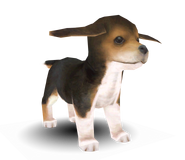 The preview icon shown for the Beagle in the Kennel. 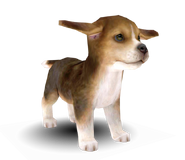 A 3-D model of the beagle found in the game's files.

A design of a beagle that was used in the trailer of the sequel.

A beagle playing dead while being stroked by the player

L Johnson's Beagles Him (left) and Her (right)

A tri-colored with white blaze beagle at the kennel

A red and white beagle from lemon and white section.