What's on your mind?

I'm thinking about doing some experiments/studies on the personalities in Nintendogs + Cats, as I was reading an older blog post from Nurylon (I also saw that FourFlames had a blog post on the same thing back in 2020) which said they were unable to find a specific personality type with the dog they were looking for, and I've experienced the same thing before too, or at least a seemingly increased rarity for the personality type and dog combo I was looking for.

It could just be down to super unlucky RNG, but I've noticed it three different times now, so I'm thinking that the probability of getting specific personality types might depend on the breed and coat color (the personalities that were showing up frequently for me were different between sable & white and black & white Shelties, for example).

I won't be able to get any solid percentages for the likelihood of certain personalities as I have no way of accessing the game code, but I can definitely put together a list of which personalities seem to be more common with which dog breed/coat colors. I'd probably look into the difference between the available personalities for starter dogs and later on in the game when more personalities are unlocked too.

If my results are consistent (I have all three versions of the game so I will test it across all of them - I did see in FourFlames' blog post that they've already put together the info for Toy Poodle so I could complete the tables for French Bulldog & Golden Retriever if that's something y'all would be interested in), should there be a section on it in the personalities page?

It's super interesting to me so I'd be more than willing to help look into it more!

I recently discovered a couple of patents from Nintendo. Both were filed in November last year and then published this past May. One patent focuses on the perspectives of a virtual camera, while the other experiments with the position of objects in augmented reality. Several figures depict a smart device with a dog.

A new Nintendogs game has not been confirmed… Nevertheless, I find these patents interesting. I could definitely see this franchise getting the mobile treatment if it were to be revived.

Hi! I wanna know why the recent page I created (Tackling) was deleted can you please explain to me why it got deleted?

Does the personality on Nintendo dogs + Cats

Matter about there ability to do some competitions and how they react to toys and other dogs?

I was wondering, if you were to have two cats in your house, would both cats bring you gifts when you leave the DS unattended for 40 mins?

Hi everyone! After all these years I remembered the Nintendogs exists and decided to download it to my laptop. Now I've been playing it for several hours straight <3

I was wondering if here is anyone still playing this game? It would be so nice to chat about our achievements on the game and all that kind of stuff.

I started the chihuahua version and got myself a sheltie called "Hippu" which means a nugget in Finnish. She already knows a couple of tricks and we also won the first agility competition!

The nostalgia is amazing after about ten years since I've played this game. But still today, as a 20 yo woman I'm as exited about this as back then when I first got the game :)

it doesnt look like any of the ones listed, all i remember about it is once i had one of those fading cuts and then it changed to this 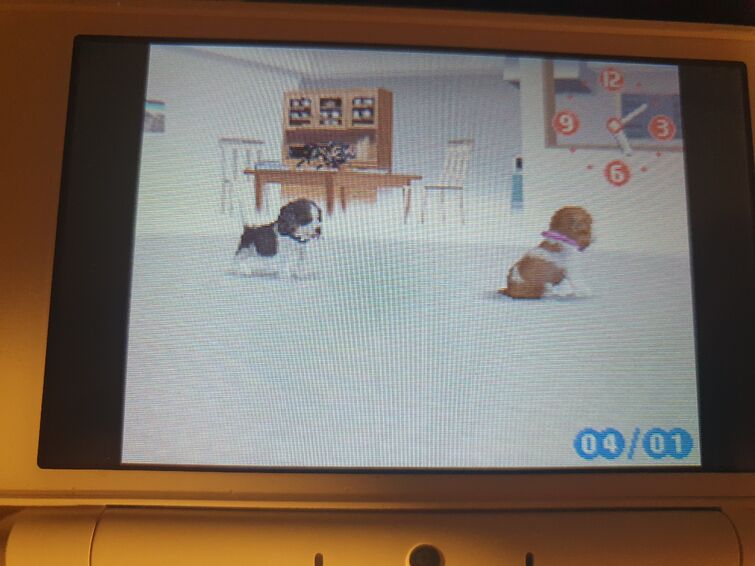 Today i received Nintendogs, i used to only have the sequel but now i have the og game

So happy about it, made my day

My game preowned but I only have 3 dogs coco poppy and snowball i bought a SOOO cute shiz-tu named damon and a cat named chaio so today I donated poopy cuz I'm gonna buy another dog like damon but I have not money. so I was about to donate coco when I bring her home and see that she is nintendogs sup in everything but obedience trail so I'm Like I SHALL MAKE MORE MONEY MWAHAHA but I can only do 2 a day urgghhh and he SUCKS at lure coursing even though he is in nintendogs cup so there's also that. HOW Do I make mooore money

I'm on a nighttime schedule, so I never play during the day because that's when I'm asleep. Does this put my nintendogs at an unfair disadvantage of being overworked easier, or will they be okay because my playtime hours are consistent? I'm wondering if I need to do anything special to help support them, like use the Naptime record more often than a day player would, or something . . . 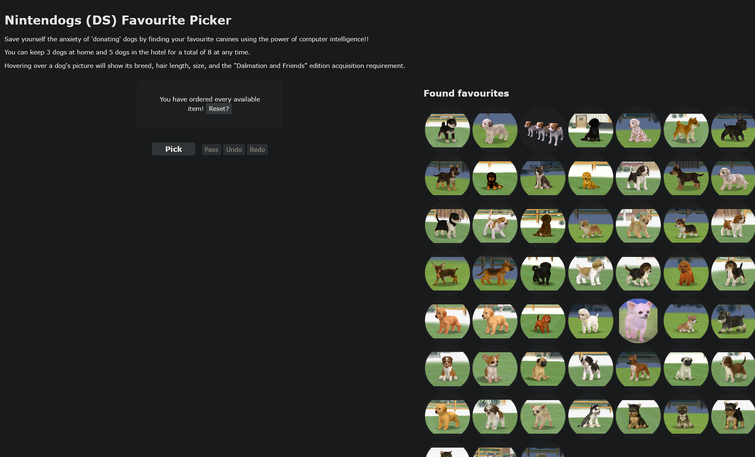 I was thinking about the small items that you can find on a walk like a tissue box or stick, but what if you never sell any items? You would just get more and more until you get to 99. But when you get to 99, you cannot get anymore, so just keep it at 99 and the game would be forced to give you rare items. But i don't have access to one, but if i did, you could use an action replay to give 99 of ALL items. So what would happen if you went on a walk, and got a present?

OR the thing im wondering, say you have Lab and friends, witch you cannot get the pizza disc on since its in Chihuahua, but you have 99 of all items and sell the pizza disc, then walk, find a present. What would happen? What if this is a secret way to find version exclusives in the game its not in?? Im probably going to share this everywhere and try to get a hold of someone who has 99 of all items. I know this was odd but it just came to me...

I want to get another dog but I have no idea what breed to get. I have GR and have 5 puppies. pls help

I'm planning on getting Toy Poodle & New Friends,and I wanted to know the number of letters for the name limit. I've been having Dachshund & Friends and I know that the letter limit is 7 in that game.Is it different in the Nintendogs + Cats Versions?I've been trying to find the answer online but I can't find anything about it.Can anyone help?

Alright, i might seem like a noob, but do i have to unlock biscuts in Lab and Friends?

or have i just not unlocked the most expensive treat yet,

also i'm asking bc my dog got plump like 2 times and i'm wondering if it's bc that, i remember seeing in a page that for an ideal dog to mantain that shape it needs to be feed only water , fine food (the premium canned food which i've already unlocked) AND the most expensive treats, since all of these have the best nutritional balance so yeah not sure which treats are the most expensive. help?